In the face of a global pandemic, ComEd understands that reliable power has never been more important and is committed to meeting customers’ energy needs.

To demonstrate this commitment and to show the impact ComEd’s energy investments have had on electric service, the company is providing residential and small-business customers with personalized reliability reports with their March bills.

What’s in the report?

The report offers customers an individualized look at their service reliability from the previous year. Customers will see their individual reliability information due in part to upgrades to the grid – and the installation of smart meters in particular. The reports show customers’ overall reliability and detailed information for any outages the customer experienced that lasted more than one minute. This data includes the specific date and cause of the outage, including the amount of time it took before power was restored.

When will customers receive their report?

How have investments made to the grid improved customers’ reliability?

Since starting smart grid investments in 2012, ComEd customers have been spared more than 16 million service interruptions due in part to smart grid and system improvements, including distribution automation or “smart switches” that reroute power in real-time around potential problem areas. The avoided outages have resulted in $2.7 billion in societal savings, including avoided business losses.

The power of these investments was on full display in August when an unprecedented derecho storm and tornadoes interrupted power to more than 800,000 customers. If not for these investments, this storm would have caused nearly twice as many families and businesses to lose power, a two-week restoration and millions of additional dollars in costs.

For information on what ComEd is doing to improve reliability, visit ComEd.com/SmartGrid.

Example of a report: 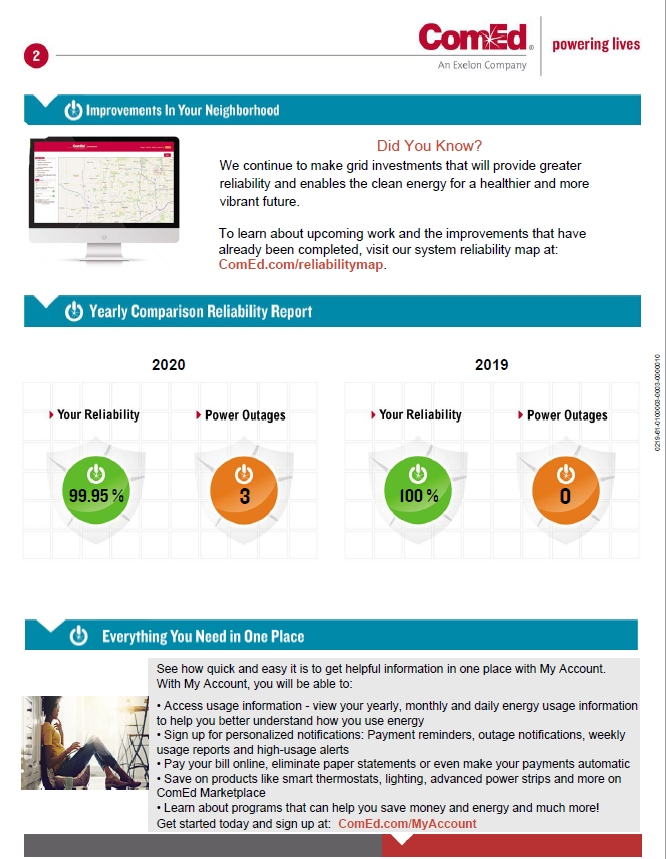